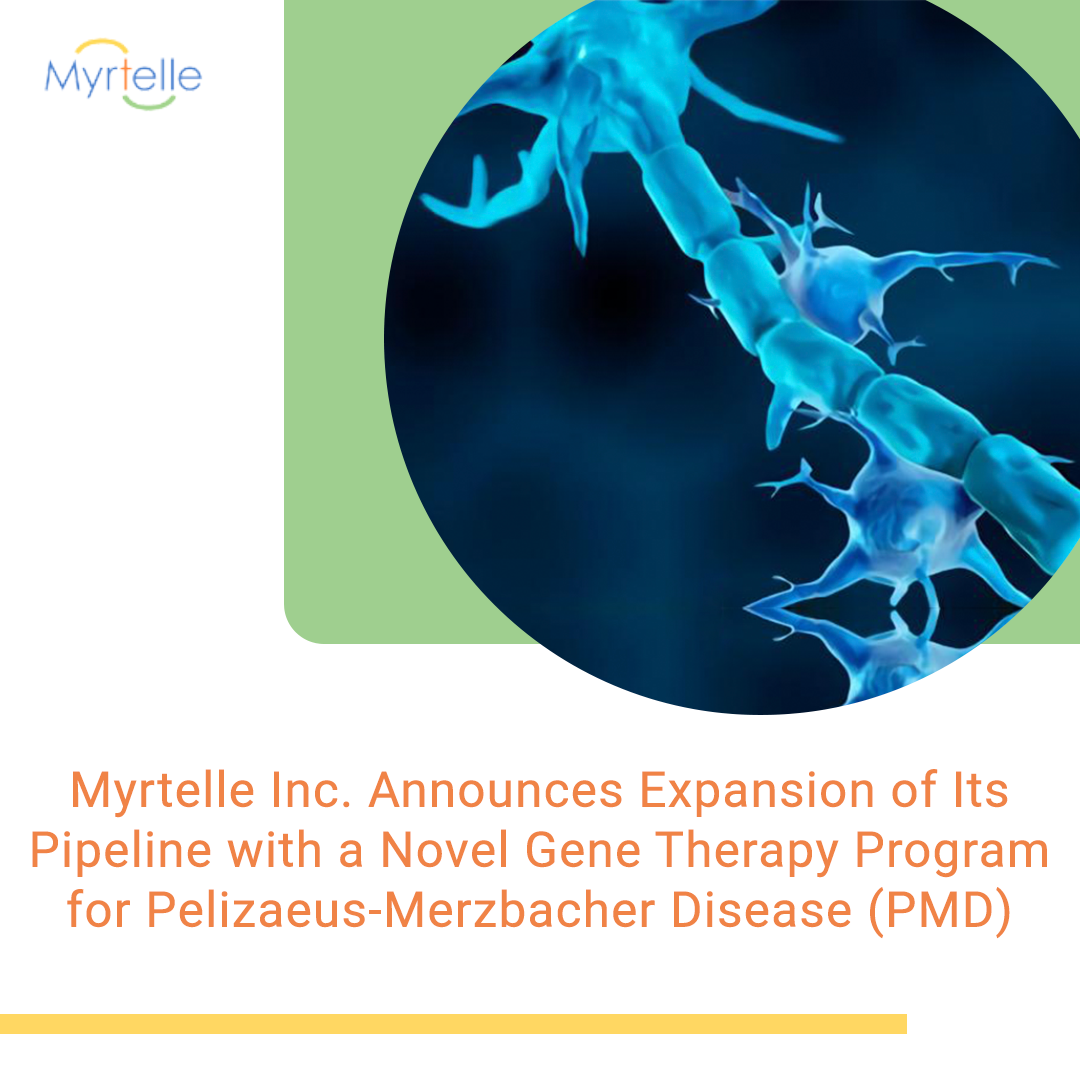 The gene therapy strategy uses a nonpathogenic recombinant adeno-associated virus (rAAV) as a vector to deliver a gene silencing microRNA (miRNA) directly to the central nervous system (CNS) to target oligodendrocytes. The miRNA is intended to reduce toxic levels of proteolipid protein 1 (Plp1), the underlying cause of PMD.

The most common form of PMD is caused by a duplication mutation of the PLP1 gene encoding the protein Plp1, one of the most abundant protein constituents of myelin. This duplication results in excessive Plp1 accumulation that disrupts proper myelin formation and triggers extensive loss of oligodendrocytes in the CNS. Oligodendrocytes are the cells in the brain responsible for producing myelin – the insulating material that enables proper neuronal function. Plp1 contributes to the adhesion of the external membrane surfaces to create the unique architecture of the myelin sheath.

Myrtelle’s PMD program utilizes a nonpathogenic rAAV that targets oligodendrocytes and delivers a miRNA to suppress the toxic accumulation of Plp1, an intervention that is designed to rescue normal oligodendrocyte function and myelin production and promote proper brain activity. “The PMD program further expands our pipeline in the white matter disease space by utilizing proprietary vectors, constructs, and capabilities to target oligodendrocytes and address the underlying cause of disorders involving myelin production. We are excited by the basic science pointing to the ability of knock-down interventions to tackle the root cause of PMD and are encouraged by the prospect that our foundational gene therapy science may ultimately lead to a new treatment option for the patients with PMD,” said Mark Pykett, Myrtelle CEO.

Myrtelle has built enabling technologies and capabilities in gene therapy for disorders involving oligodendrocytes and myelin production. A core of the company’s platform is a novel class of rAAV that selectively targets oligodendrocytes and can preferentially deliver genetic payloads, such as replacement genes or knock-down miRNAs, to these cells to restore their proper function and myelin production. The Company’s lead program is in clinical development for Canavan disease and uses an intracerebroventricular route of delivery of an oligodendrocyte-tropic rAAV to provide a corrective ASPA gene, which is mutated in Canavan disease. The PMD program leverages similar strategies to selectively address Plp1 over-expression in oligodendrocytes, the underlying cause of PMD. “Gene silencing can address the underlying disease mechanism in many severe and life-threatening conditions. Coupling gene silencing with oligodendrocyte-selective vector delivery is a powerful means to extend this strategy to white matter disorders like Pelizaeus-Merzbacher disease and offers hope for development of novel therapeutics,” said Rick Layer, PhD, Myrtelle’s Head of Pharmacology & Translational Science.

Myrtelle Inc. is a gene therapy company focused on developing transformative treatments for neurodegenerative diseases. The company has a proprietary platform, intellectual property, and portfolio of programs and technologies supporting innovative gene therapy approaches for neurodegenerative diseases. Myrtelle has an exclusive worldwide licensing agreement with Pfizer for its lead program in Canavan disease. For more information, please visit the Company’s website at: www.myrtellegtx.com.

PMD is a rare, fatal, X-linked, recessive demyelinating leukodystrophy often presenting in the first year of life and is most often caused by a duplication mutation of the PLP1 gene encoding the protein Plp1, one of the major protein constituents of myelin. Plp1 protein is part of an assembly that makes up ~50% of the central nervous system (CNS) white matter and plays an important structural function in myelin production. The duplication results in an over-expression or toxic gain-of-function of Plp1 protein that prevents proper myelin formation, resulting in extensive loss of myelinating oligodendrocytes in the CNS. PMD’s presenting symptoms include hypotonia, nystagmus, and delayed developmental milestones, especially in motor function. PMD is characterized by progressively deteriorating coordination, motor abilities, and intellectual function, leading to early death, often before adulthood. It is estimated that there are approximately 3,500 patients in the US with PMD; there are no effective therapies available for PMD, and currently, patients receive only palliative treatments.